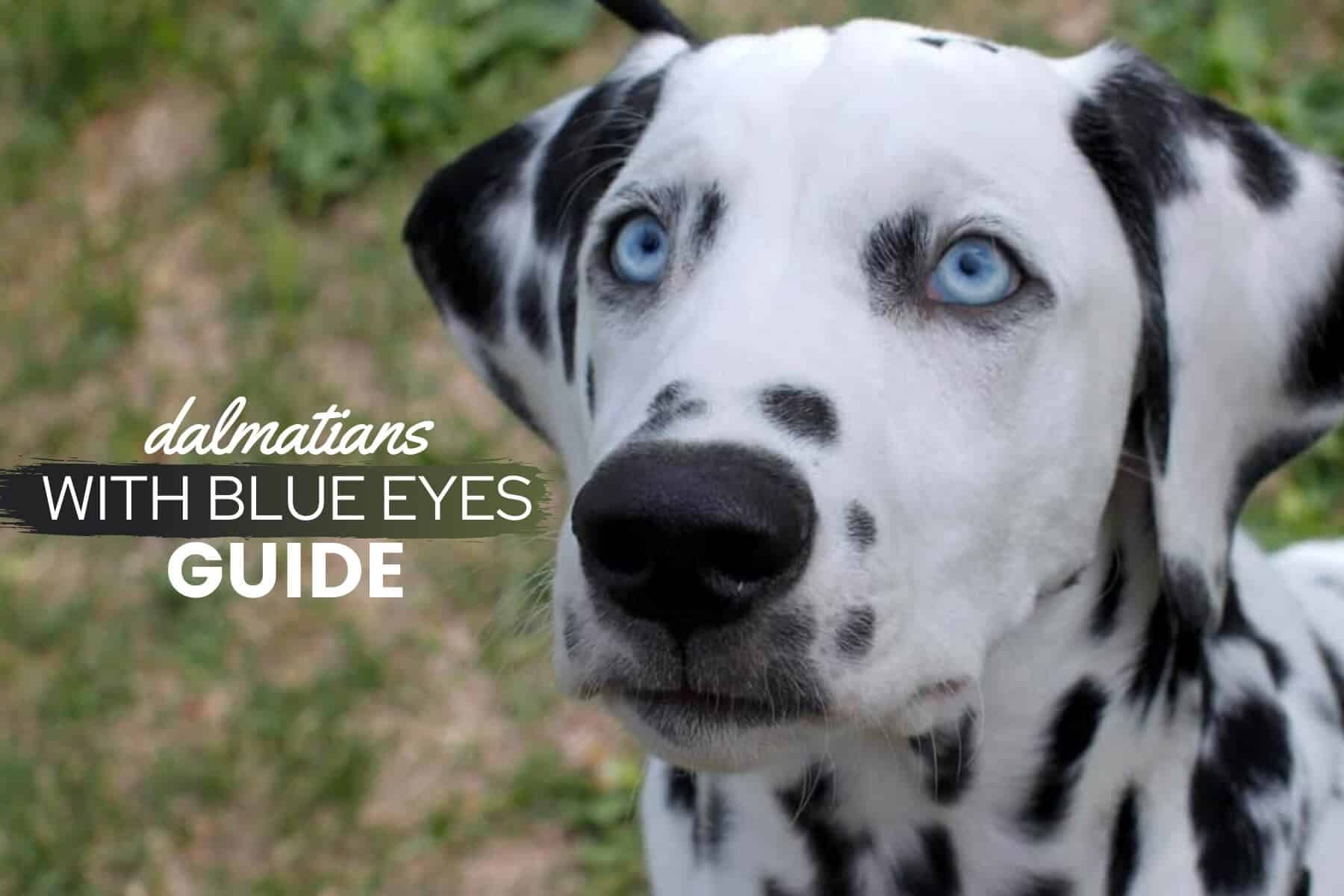 
This guide contains everything you need to know about Dalmatians with blue eyes.

Dalmatian dogs are easily identified by their unique black, liver-spotted coats and regal looks. However, blue-eyed Dalmatians are rare and can sometimes be a warning sign for hearing loss, as the gene that causes blue eyes is associated with deafness.

So if you want to know everything about this rare Dalmatian breed, then you’ll love this guide. Let’s dive right in!

History of The Dalmatian

The origin of the Dalmatian dog breed remains a mystery. However, research shows Dals can be traced back to the British Isles, Europe, North Africa, and Asia. Ancient artifacts and paintings resembling the Dalmatian characteristics support this research. One such painting, a fresco from 1360, is held in the Spanish Chapel of Santa Maria Novella in Florence, Italy.

Dalmatians’ original role is uncertain, but it’s believed they were originally bred to be coaching dogs. Dalmatians were used to run along carriages or horseback riders to guard and alert the coachman or rider of the presence of highwaymen. Although the Dalmatians are not from Dalmatia, a southern region in Croatia, the breed gets its name from this region. With the introduction of horse-drawn fire engines back in the 1800s, Dals began their long association with firefighters.

There are two types of dalmatians we are going to discuss: Brown-eyed and blue-eyed. These variations are based on physical appearance.

What sets apart dalmatians with blue eyes from their brown-eyed counterpart is their eye color, obviously. However, this eye color difference is associated with health-related issues, which we detail later in the article.

The Dalmatian is a medium-sized dog with a sleek athletic-looking body. Males can grow between 19-24 inches tall and 45-70 pounds. Females can be 18-23 inches tall and 45-70 pounds. The tail is relatively long and has a slight upward curve. Dalmatians have a short, shiny coats with distinctive spots as their main unique feature. This breed is intelligent, alert, and highly active with great endurance.

Why Some Dalmatians Have Blue Eyes?

Why are dalmatians born with blue eyes? The default eye color for dogs is brown. However, genetics, pigmentation, and health issues can all alter the color of a dog’s eye.

Let’s explore the causes of this eye-catching trait in Dals and learn why Dalmatians have blue eyes.

The merle gene is responsible for random pigment dilution (whitening) of the nose, eyes, and fur. If the merle gene is present in Dalmatians, they are more likely to have blue eyes. Adopting the gene doesn’t guarantee blue eyes in Dals or any dog.

Scientists at Embark Veterinary, Inc. conducted the most extensive study where 6,000 dogs’ complete genetic profiles were analyzed and found that a gene known as ALX4 on canine chromosome 18 is strongly associated with blue eyes.

Dogs who lack the genes necessary to produce melanin, the pigment responsible for skin and hair coloring, will be considered albino. The massive loss of pigment through their entire body may also result in a pink nose and blue eyes.

So what does it mean for a Dalmatian to have blue eyes? Does it have any repercussions on its health?

While blue eyes on your Dalmatian may be a striking feature, they can increase the likelihood of major health concerns in your pet.

According to the University Federation for Animal Welfare and the American Kennel Club, deafness is present in the breed, with around 30% of Dalmatians being affected by deafness or hearing impairment to some extent.

Deafness in certain dog breeds is associated with the Merle and Piebald genes. Congenital deafness is linked to the merle gene.

The Piebald gene is responsible for spotted dog breeds. Breeds commonly affected by the piebald gene include Bull Terriers, Boxers, English Setters, and Dalmatians. It’s known that this gene can also cause deafness due to a lack of mature melanocytes (melanin-producing cells) within the inner ear. Affected dogs are at higher risk of injury through, for example, road traffic accidents. Dogs should be tested for hearing loss, and only those with healthy ears should be used for breeding.

If you are thinking about adopting or own a deaf dog, we recommend you learn how to communicate with a deaf dog as well as get a collar for deaf dogs and a dog ID tag to keep everyone around aware and safe.

Kidney stones, bladder stones, hyperuricemia, and gout are other common health concerns you should be aware of. These conditions are more prevalent in males than in females. Consult with your vet to control these issues through a well-rounded diet. Other than that, Dalmatians are pretty healthy.

We also recommend doing an at-home dog DNA test like Wisdom Panel to help you identify if your Dalmatian carries the gene (s) for blue eyes, other genetic disorders or complications. This will help you provide them with the best possible care.

Temperament of A Dalmatian

The first dalmatians were originally bred to guard horses and coaches, which explains their protective instinct. With proper training, dalmatians can become excellent watchdogs.

In general, dalmatians are dignified, smart, and outgoing pets. They have a balanced temperament and are usually well-behaved dogs if appropriately socialized. They are highly energetic and athletic traits that make them the perfect furry friend for active pet parents. However, experts say the breed may be too energetic for small children. Dals have great memories and can be sensitive and reserved dogs.

According to this intelligence ranking, dalmatians rank 39th among all dog breeds. According to canine psychologist Stanley Coren, Dalmatians are also ranked as an “above average intelligent” dog breed. They’re the 62nd smartest dog breed out of 138 qualifying breeds for obedience/working intelligence.

If you dedicate yourself to training your Dalmatian, they will learn quickly. Dalmatians are capable of learning a brand new command with just 15 to 25 repetitions.

Dalmatian puppies with blue eyes may be the cutest furry baby ever, but you need to know some tips and precautions before breeding or buying blue-eyed Dal puppies. If your dalmatian puppy came from a reputable breeder, they should provide a record of genetic health testing done on the parents and your dalmatian puppy.

Remember that deafness is present in the breed, especially if they are Dalmatian puppies with blue eyes. Responsible breeders will have the entire litter tested to ensure that all can hear. If not, you should request they do.

When buying a puppy, be diligent. Make sure this breed fits your personality and your family’s lifestyle. Choose reputable and responsible breeders. The AKC Market Place is an excellent place to start your search and find dalmatian puppies with blue eyes on sale in your area. When possible, always consider fostering and adopting.

The breeding of blue-eyed dogs is sometimes frowned upon or even considered inhumane. “Why?” you ask.

When two Merle gene carriers are bred, their litter becomes known as “double merle”. This puts the little ones at greater risk for health issues.

Blue-eyed dalmatians can produce totally healthy offspring, but often they produce deaf puppies. However, litters from a Marle carrier bred with a non-carrier do not exhibit any health issues.

Should You Get A Dalmatian With Blue Eyes?

Does a blue-eyed dalmatian appeal to your liking? Generally, dalmatians make excellent pets and are great with older kids. Dalmatians are intelligent, active, protective, gentle, and non-aggressive. Improper socialization with dogs and people can lead to behavioral problems. Nonetheless, Dals can rise to almost any challenge if properly trained and nurtured.

If you are set on getting a Dal pup, internationally renowned animal behaviorist Dr. Ian Dunbar offers the best advice to raise A Happy & Healthy Dalmatian, a must-read for any Dal dog parent.

Owning a dalmatian with blue eyes comes with extra responsibility as blue eyes in dogs increase the likelihood of deafness. Breeding is another factor to take into consideration when owning a blue-eyed dalmatian. 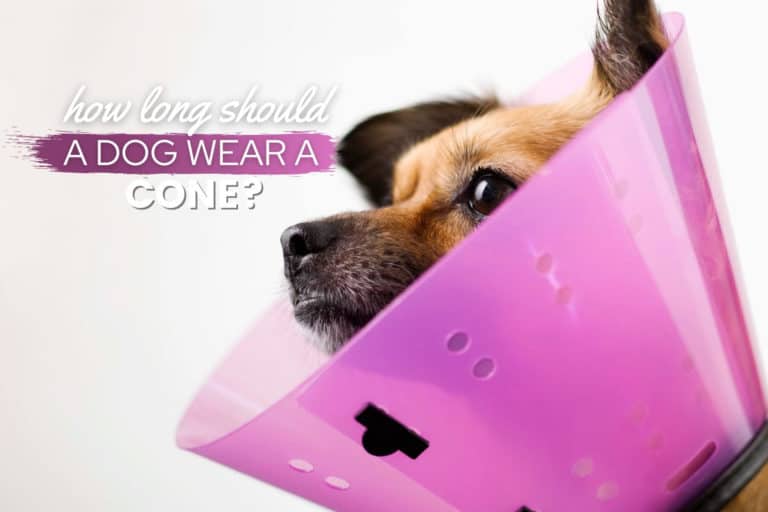 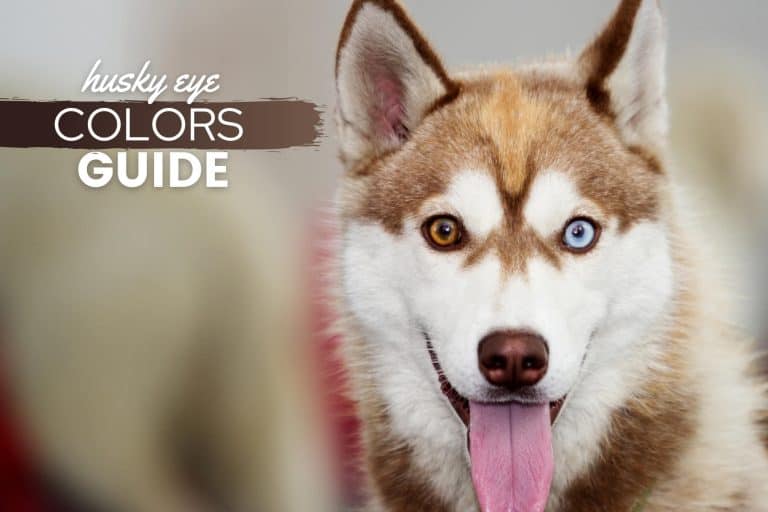 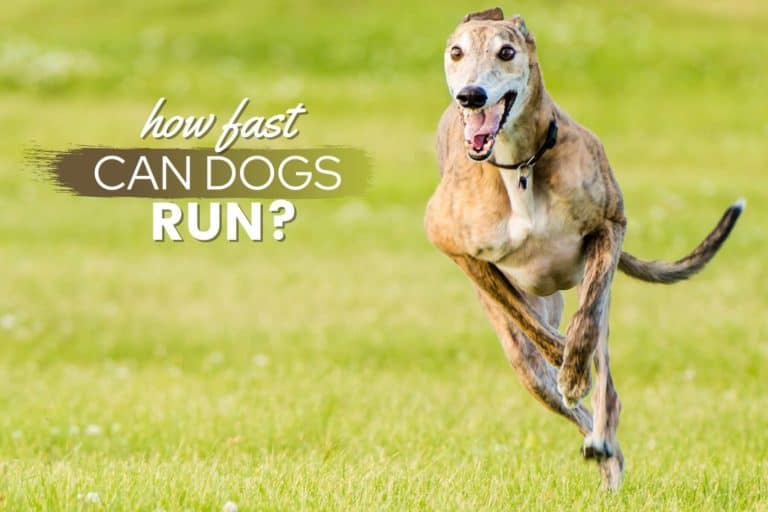 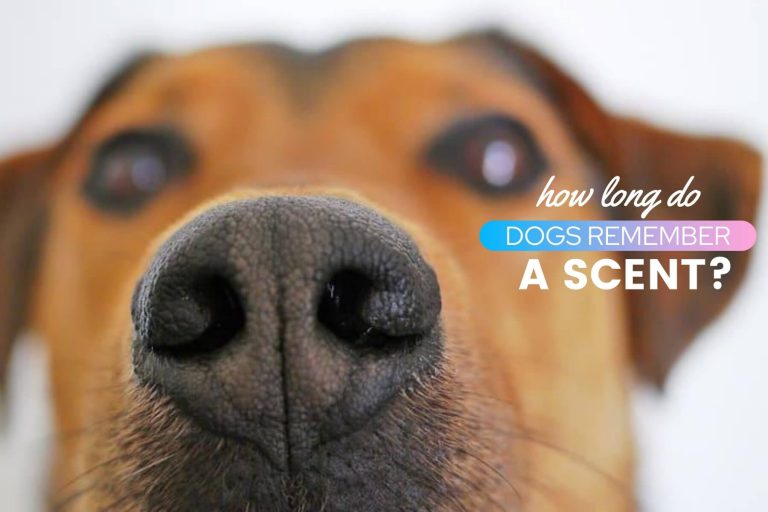 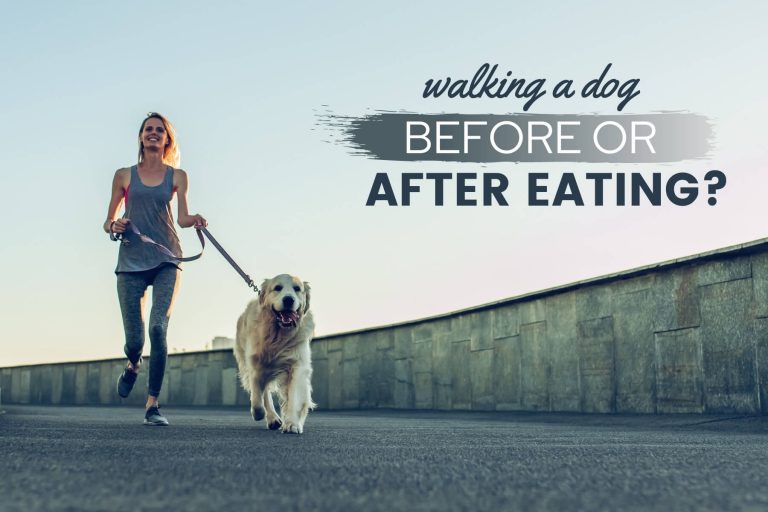 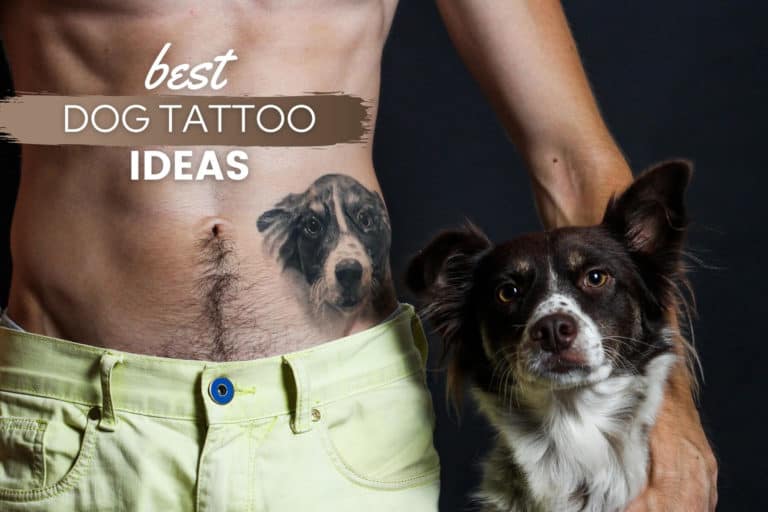 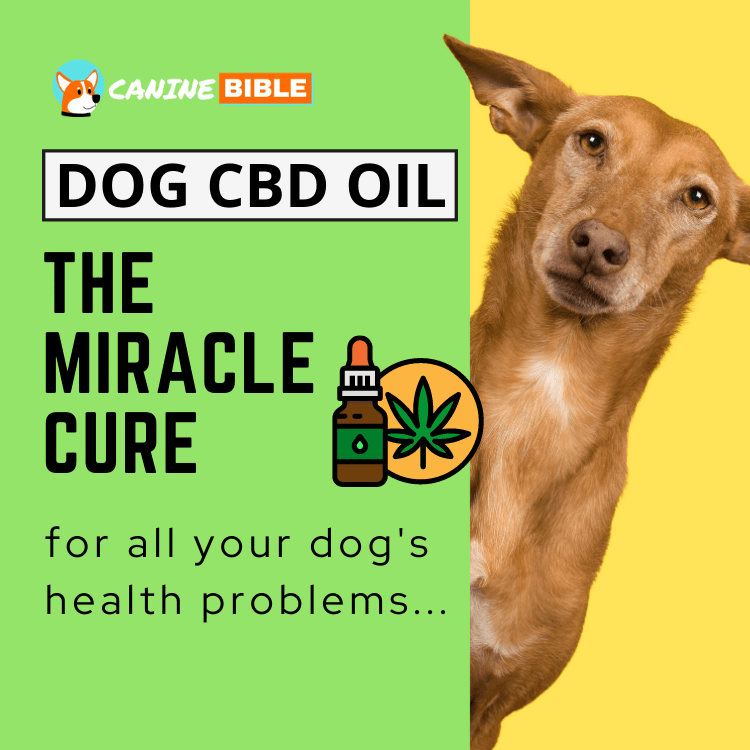 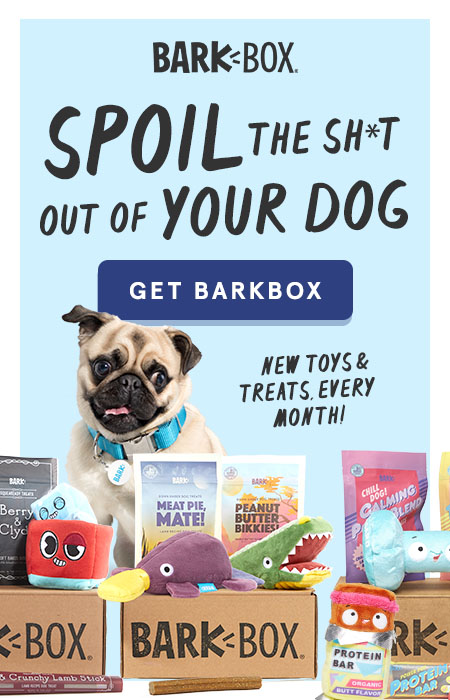 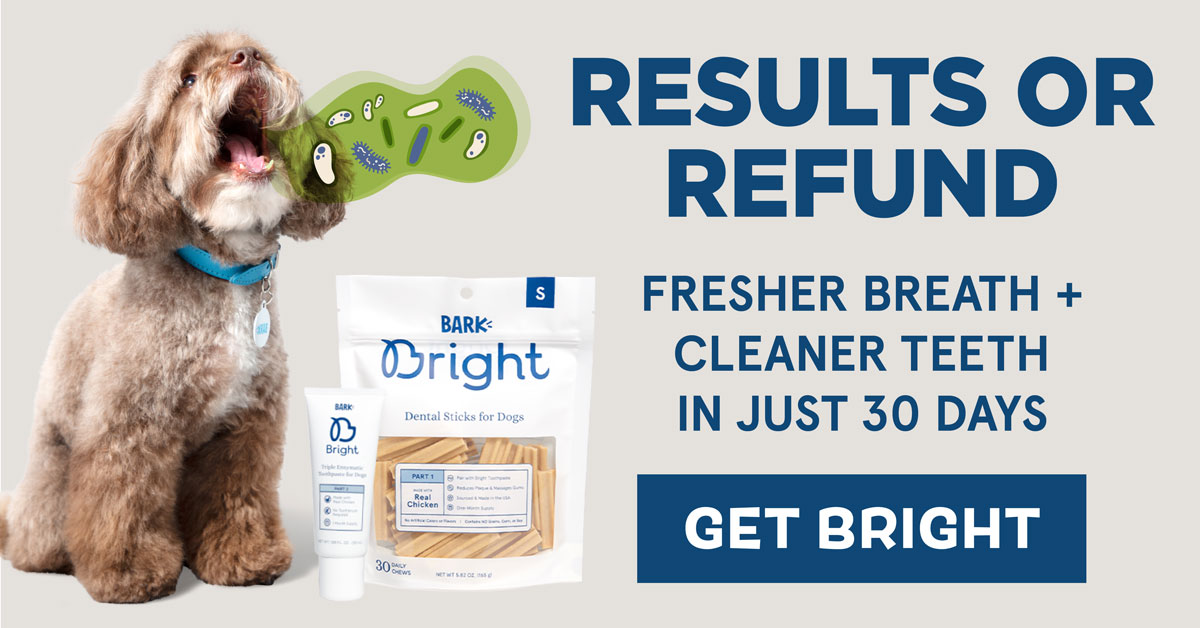